Repco Retrial 2019 – Our journey with our XT Falcon GT

The 1979 Repco Reliability Australia was the last great Around Australia rally – a tradition that had started from the early Redex trials in Australia. The 1979 event turned out to be a watershed event for Holden; three new, untested new model VB Commodores led by Peter Brock made it a clean sweep by the HDT team, ensuring commercial success for Holden and the win considered Peter Brocks greatest victory. 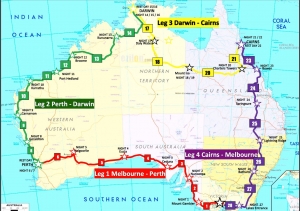 19,000 km in two weeks, a low finish rate, two fatalities, and extreme fatigue made this a dangerous, grueling and relentless rally that today could never be recreated. We remember it 40 years later….

Ian Oliver takes up the story….

For the 40th Anniversary of the iconic 1979 event, the Repco Retrial was not a race nor a ‘rally’ as such, but a social rally over 15,000km and a month. Whilst non-competitive it was certainly still an endurance challenge for aging cars (our car 51 years old) bringing together a very diverse range of cars and competitors of all ages.

We bought the Candy Apple Red 1968 XT GT Falcon in the original condition it was for this event.

Our crew consisted of myself, Derek Stewart, Ron Farrelly, brother Allen Oliver, and my wife Tina. 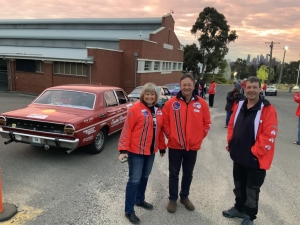 We registered our 200 series Landcruiser as our service vehicle which Tina drove mostly whilst the others shared the driving of the GT Falcon.

In preparation for the event, the Falcon GT XT had a full overhaul & rebuild of the engine, while still retaining the authenticity of the car. Front seats were replaced with bucket seats & retractable seat belts were installed for safety and everything was done in such a way that the car could easily be brought back to its original stock condition.

The event started with 46 cars & 140 people with 4 legs at each end with rest days at Perth, Darwin & Cairns.

We were privileged to be amongst some of the original cars & drivers. The original VB Commodore driven by Barry Ferguson, Renault 12 with Mal McCann and Greg Walker, paying tribute to an original competitor and character John Kipling (son of “Possum Kipling” who won an earlier Redex event). 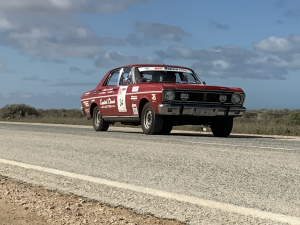 Every day we were given route directions which included different stages that were part of the original stages, mainly dirt roads. It was at everyone’s discretion if they wanted to follow these stages.

We were pleased with how we attempted most of the old dirt road stages, the GT had very little fail mechanically apart from needing to clean the rear differential breather. Slight leakage from the oil seals & rear shock absorber rubbers caused us little trouble.

Our driver Derek maintaining the GT with a service & oil change in Darwin, much needed!

Along the way we stopped at some amazing places & everywhere we stopped the locals we very welcoming; they love seeing old cars.

The XT GT made her way from Bathurst via Queanbeyan where we were able to meet up with some close family (even STHARC Max D’Oliver managed to spot us and take a pic at the local servo!) and into Cooma. The Cooma Car Club kindly hosted us for lunch in their clubrooms.

Finishing back at the Melbourne Showgrounds minus 2 cars, we all made it! 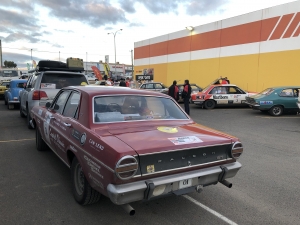 The sense of relief and accomplishment was overwhelming. The official winner of the event was Barry Ferguson. A fitting tribute to a gentleman that was instrumental to Holden’s success 40 years ago.

No regrets. The highlight of the event was meeting and spending time with the original participants of the 1979 Repco Retrial. Listening to the original competitor’s stories and likewise, it was a pleasure meeting like-minded car people who also thought that driving 15,000km in 28 days would be a good idea.

Our Car 34 XT GT Falcon Team would like to acknowledge the outstanding efforts of Todd Martin and Muscle Car Events, and all management and support crew who had our back for the 28 days of the ‘rolling feast.’ Also, a special thank you to our many sponsors: Queanbeyan Diesel Services, R6 Digital and Capital Classic Autos, Queanbeyan City Travel & Cruises, Supetto Collectives, Jerrabomberra Hotel and Mr Brandman who made the task of funding our journey easier.

Car 34, our XT GT now sits in Ian & Tina Oliver’s collection at Capital Classic Autos, still with its red dust as it finished the event showing that the car covered the journey with no breakdowns and still has the capability of being enjoyed again on similar events.