Capital Classic Auto’s entered the prestigious Falcon GT Nationals, run by the Falcon GT Club of Australia held over Easter in Adelaide. A regular event, the ‘Nationals” attract the crème de la crème of Ford Falcon GT’s from around Australia, along with their fastidious owners and thousands of admiring fans.

From the original Falcon XR GT to the last off the production line GT-F’s al models in various conditions from completely original (like our GT-HO) right up to fully restored examples including tributes and modified cars.

There were lots of new cars never seen before, fans commenting on every little detail. While gold was a popular colour, many of the iconic colours like Track Red, wild Violet and Vermillion Fire were on display. 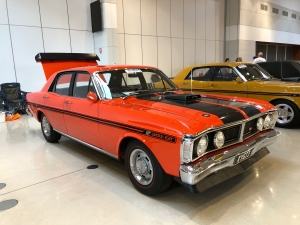 25th and 30th-anniversary Falcons were on display and these are rising in value. Fords 1977 famous 1-2 victory at Mt Panorama celebrated by many Falcon XC Hardtops.

One of the most famous Falcons KAG-003 was on display, still with original dirt from the 1968 London to Sydney Car rally, considered by many to be the toughest rally of all time. 6th outright the prize for this original car with Bruce Hodgson at the wheel.

The event also hosted a “Show and Shine”, along with a Hillclimb blast at Willunga, cars blowing out some cobwebs and Fred Gibson attended the presentation dinner with some great Ford factory stories.

While there is no outright prize, cars compete in their respective classes and our original Falcon GT-HO Phase 3 which is totally unrestored and in original condition was awarded: